Saturday night’s WBO welterweight title fight in Brisbane, Australia featured champion Manny Pacquiao and challenger Jeff Horn. Challenger Horn came out strong in the first round and winning that stanza. Pacquiao then seemed to settle in and secure the next several rounds. Although seemingly outmatched, Horn showed heart, grit and toughness, as he continued to attempt to take the fight to the champion, despite him constantly being caught with shots as he made his way in.

The fight was actually nearly stopped following a ninth round in which Pacquiao battered the Austrialian for the duration of the round and left Horn stumbling around the ring, looking at time out on his feet. Somehow Horn’s convinced the referee that their fighter would “show him something”, and he did by coming back and winning the following round, as Pacquiao looked a bit spent from the effort put out in the previous round trying to end the fight. Pacquiao came back and won a closer contested round eleven and then fought the final round like a fighter who was under the assumption that he had several rounds in the bank ( watching the fight it was easy to assume why he thought that, but the argument can be made that you should not assume anything when judges are involved).

When the judges’ scorecards were read, I assumed they saw what I did- an older, albeit past his prime fighter used his knowledge and skill to best a younger but less skilled and seasoned fighter. The first card was scored 117-111, which was a reasonable, considering the fight that had just taken place. The last two scores were both 115-113 which were way too close for this bout. When they announced that Jeff Horn had won via unanimous decision, I knew I had just witnessed yet another infamous moment in boxing judging.

Teddy Atlas going nuclear ringside post fight was an accurate summation of what transpired. Timothy Bradley, who was also on commentary, thought the fight was closer still said Pacquiao won the fight.

Though judging in combat sports can be subjective,this was not a situation of a hotly contested back-and-forth bout in which a case for victory could be made for either pugilist; one fighter was clearly the superior fighter for three-fourths of the fight. In cases like this, the judges cannot be swayed by crowd reactions for a favored fighter. As Atlas said in the clip, Pacquiao landed the cleaner shots and wins should not be given “for trying hard”. 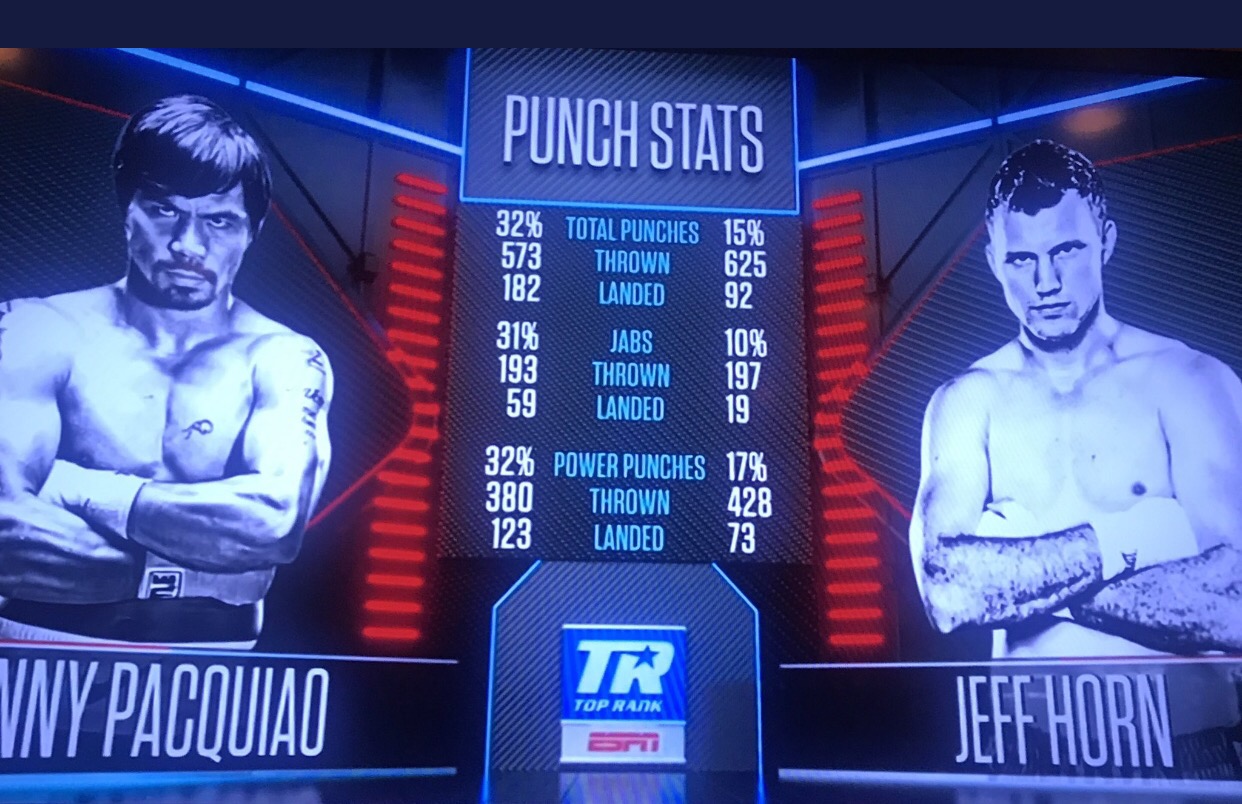 Professional boxing has some issues. In addition to its decline in prominence It is controversial decisions such as this that has turned many off from boxing because they question the integrity of the sport. If there are officials in boxing that cannot distinguish that a fighter that spent three-fourths of a fight blocking his opponents punches with his face ( a “strategy” that nearly got the fight stopped) was not the winning boxer, then perhaps they have no business judging that sport. Allowing this clear incompetence to persist unchecked makes it appear that the sport does not possess nor has any interest in implementing the institutional mechanisms to ensure substandard officials are flushed out of the sport. Until boxing makes this a priority, decisions like this will continue to happen and the stench of ineptitude and/or corruption will hand on the sport and fans will scoff at the sweet science.