Late in the first half in their game against Vanderbilt Saturday ,Tennessee State linebacker Christion Abercrombie suffered a head injury and collapsed on the sideline. He was taken off the field on a stretcher  He was rushed to Vanderbilt University Medical Center where underwent emergency surgery.

“The last I heard he was in surgery; we’ve been praying for him,” TSU coach Rod Reed said after the game. “I’m going to leave here and go there to see about him.”

Coach Reed was unsure as to precisely when the injury occurred.

“It was right before the half,” Reed said. “He came to the sideline and just kind of collapsed there.”

The Atlanta native was given oxygen on the sideline and then taken away on a stretcher.

Abercrombie redshirted at Illinois in 2016 and played 11 games for the Illini before transferring to TSU. He’d come into Saturday’s game second on the team in tackles and had recorded five more tackles and a quarterback hurry prior to his injury.

Tennessee State officials did confirm that Abercrombie was out of surgery and is under constant observation in ICU. They also said a prayer vigil was held on campus for Abercrombie Saturday night. 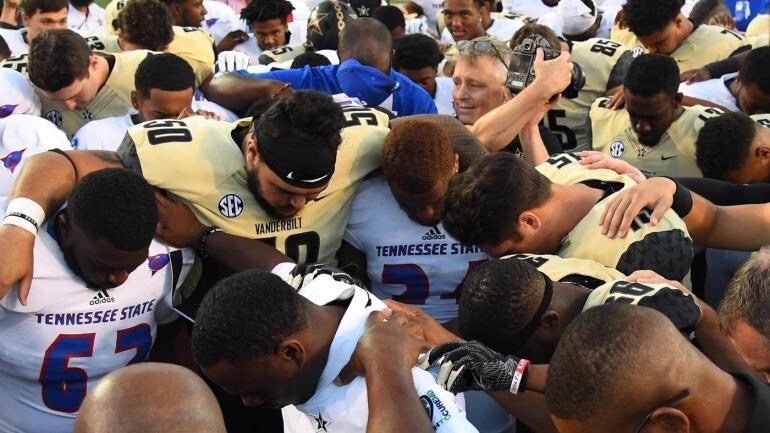 After the game, both teams met at midfield and united in prayer. Vanderbilt Head Coach Derrick Mason and Reed, who are close friends, embraced.

Before taking any questions at his post-game news conference Coach Mason spoke about Abercrombie’s injury: