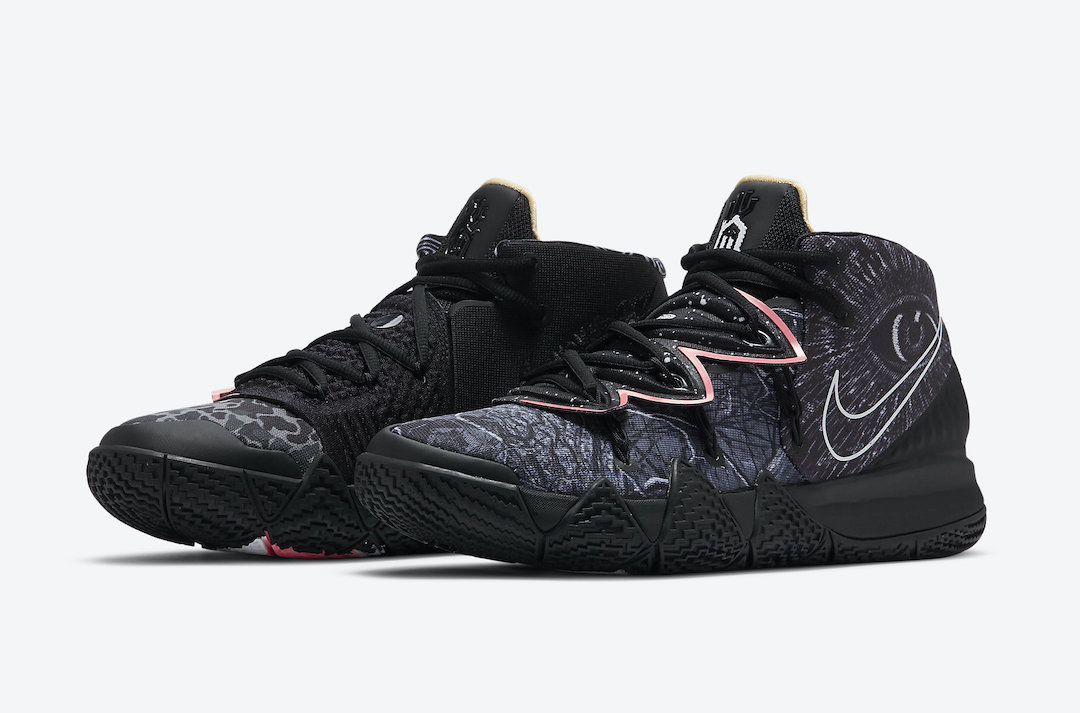 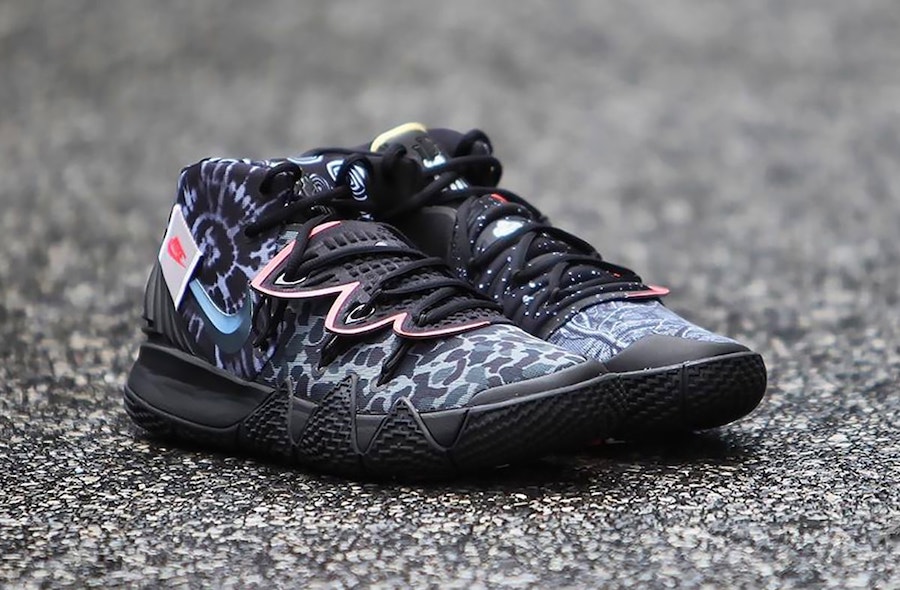 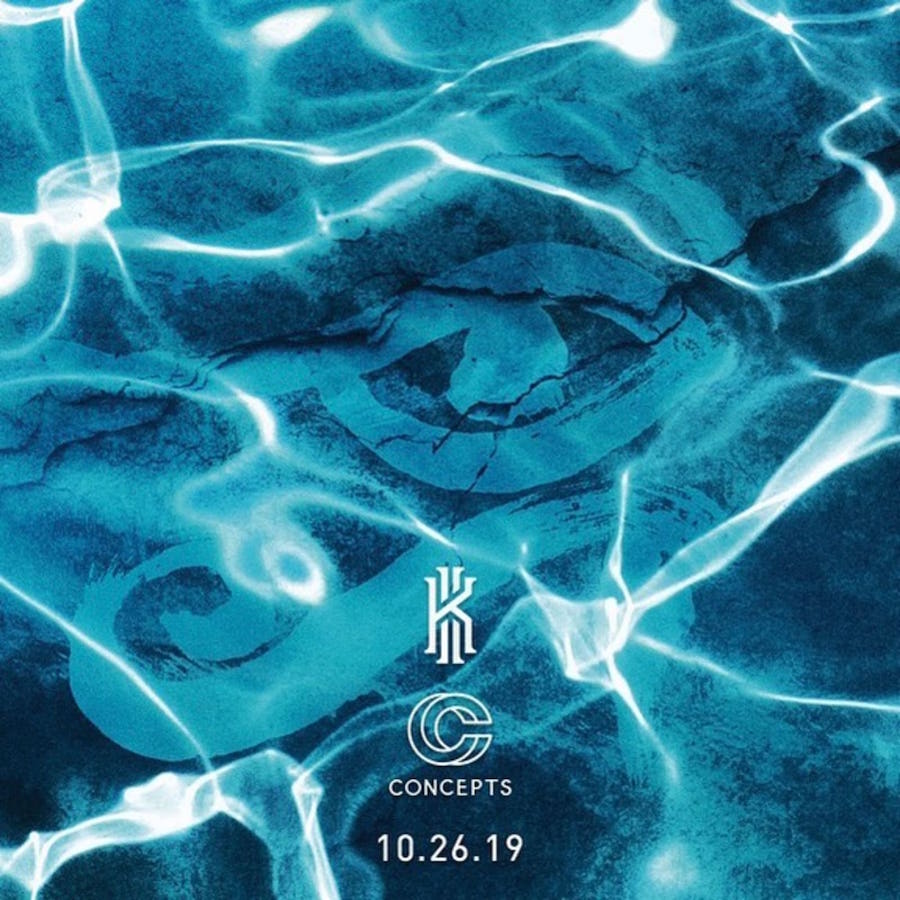 After collaborating with Nike on the “Green Lobster” Kyrie 4 and the “Ihket” Kyrie 5 in 2018, Concepts is following up with this latest Kyrie 5. The colorway references the belief that the constellation Orion’s Belt is in perfect alignment with all three of the Great Pyramids in ancient Kemet (Egypt). The various blues and the heel counter represent a water line, and a reference to the belief by some that the structures were submerged at one point in time. The “Orion’s Belt” Kyrie 5 will release October 26 at… 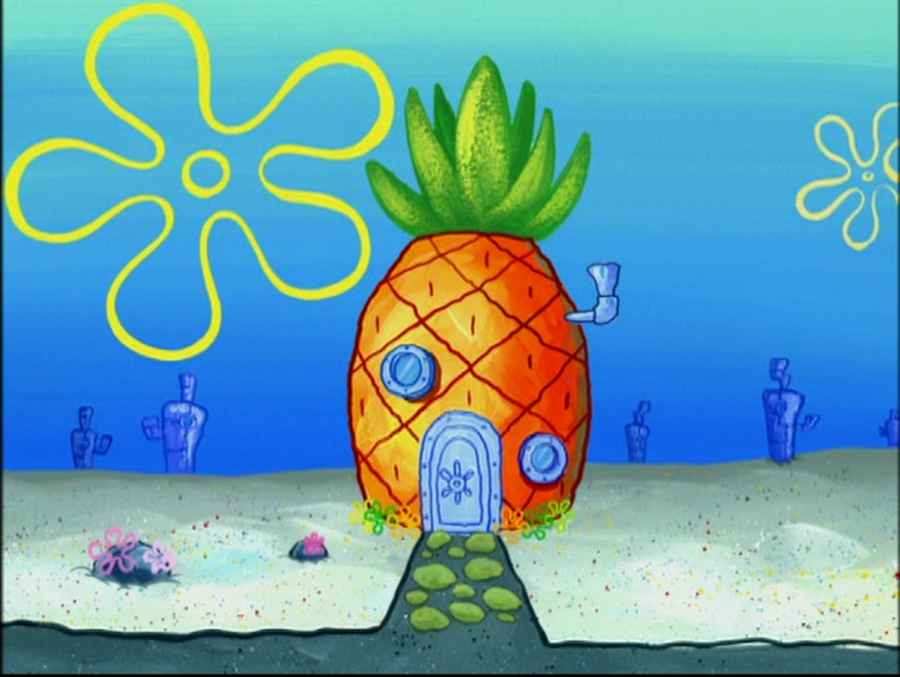 The SpongeBob inspired themes continued on the Kyrie 5 with this latest version paying homage to the squared one’s pineapple house. The upper of the shoe is derived from the facade of home, with the Flytrap coming from the leafy top of the domicile. The Swooshes are the windows that provide a view of the underwater environment. On the heel are embroidered nautical wheels, which is the door handle from SpongeBob’s house. The tongues feature a Kyrie logo in a font seen on the television program, and on the insole… 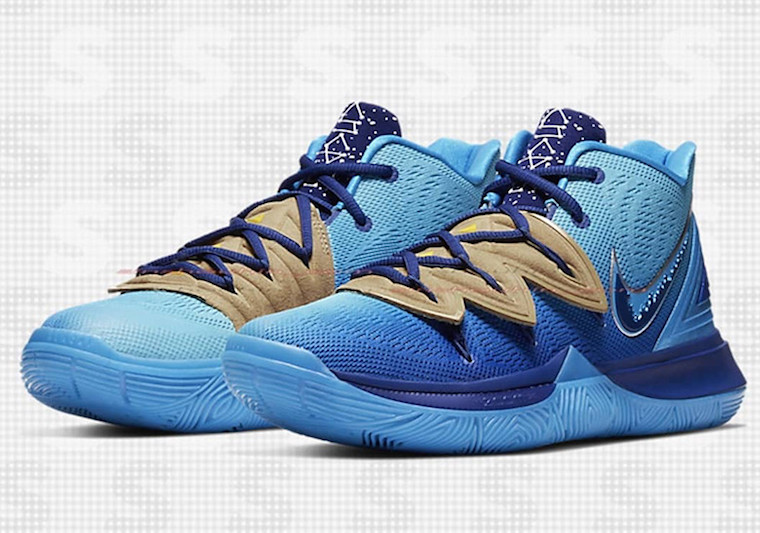 Following their “Green Lobster” Kyrie 4 and the “Ikhet” Kyrie 5, Boston based Concepts is dropping another collaborative Kyrie 5. Inspired by constellations , which can be seen on the tongue and Swooshes, this sneaker sports a gradient blue hue with tan showing up on the Flytrap . A darker shade of blue comprises the midsole with a light blue outsole completing the aesthetic. At this juncture, there are not release details available but we will have them once that information avails itself. 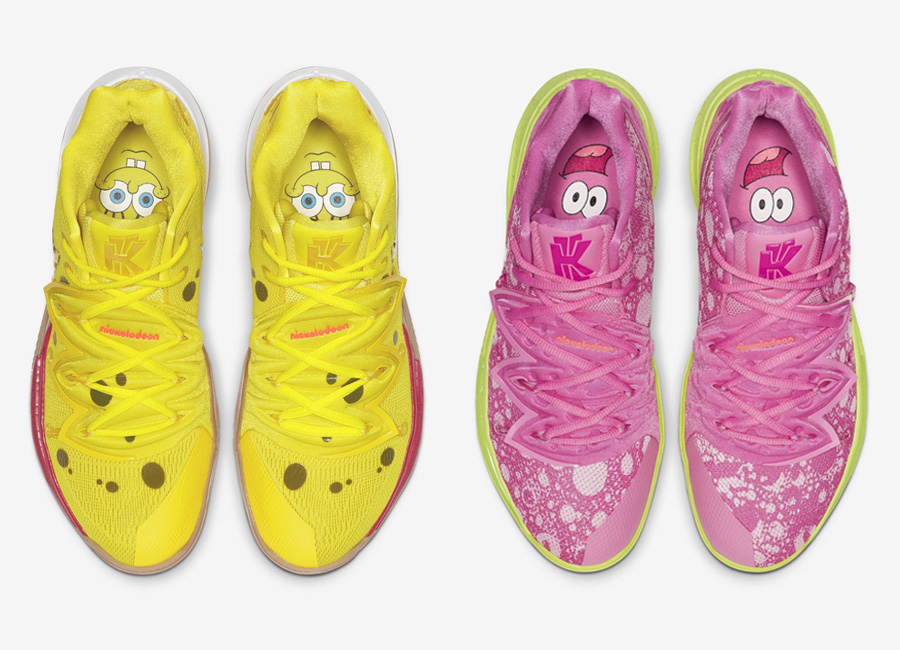 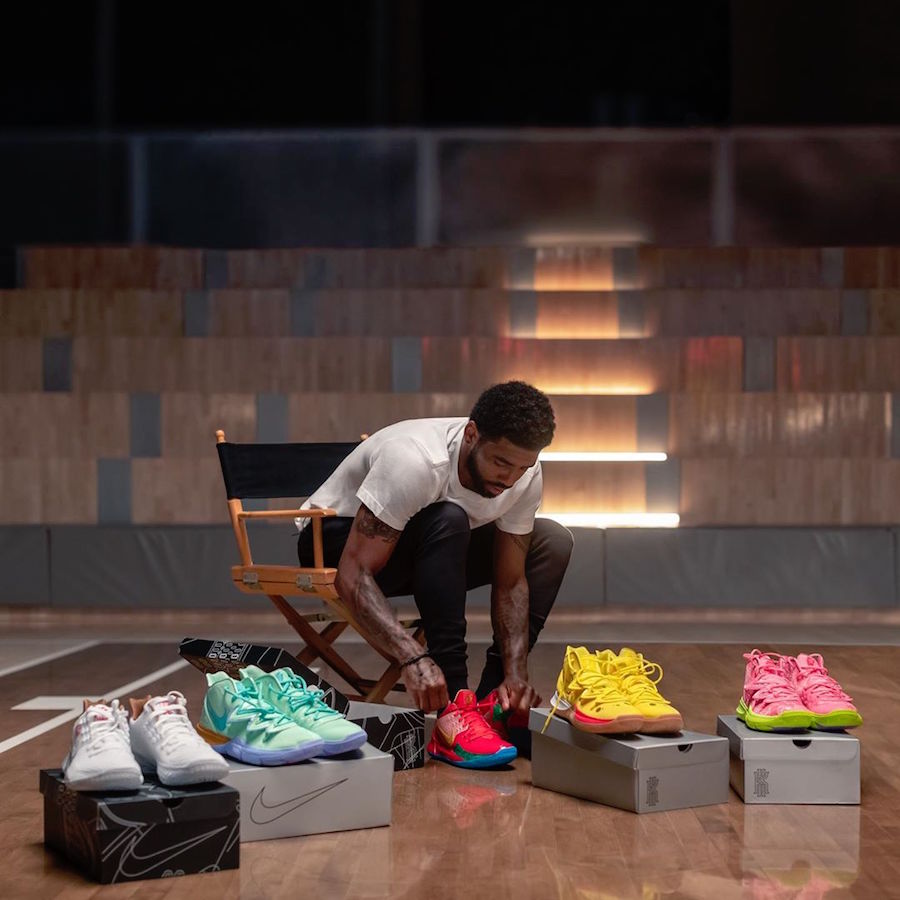 Kyrie Irving unveiled the entire “SpongeBob x Nike Kyrie 5” Collection at Rocnation Sports recently. The collection features Kyrie 5s and Kyrie 2 Lows inspired by characters from the show. We could see a release of this collection later this year. 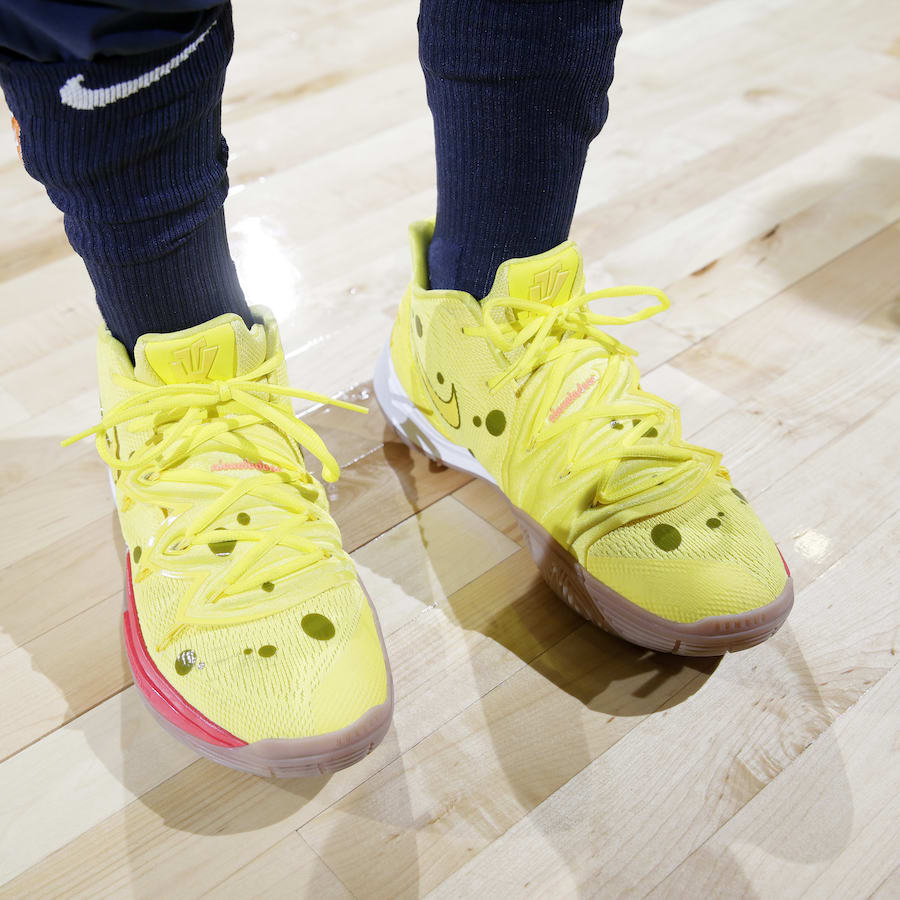 These two colorways of the Kyrie 5 are inspired by SpongeBob and his right-hand star, Patrick were debuted on the feet of WNBA ballers Tina Charles and Odyssey Sims.  The SpongeBob version features a yellow upper with sponge-like details, even on the Swoosh. A Nickelodeon logo on the Flytrap rounds out the look of the upper, which  sits atop a white midsole and a gum rubber outsole.  The Patrick version features a pink upper; behind the tongue is the starfish’s name. The neon midsole and outsole are reminiscent of Patrick’s trousers. … 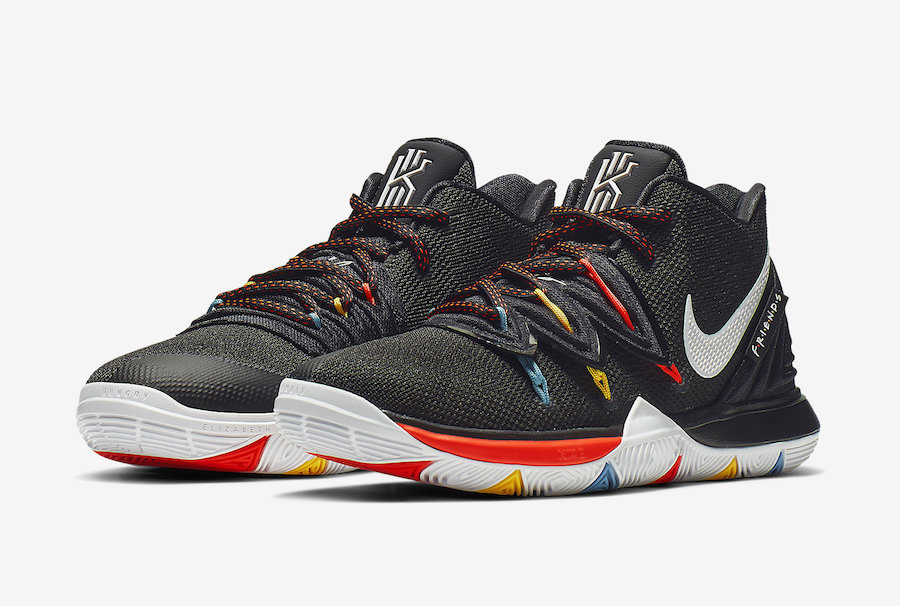 This special edition Kyrie 5 is inspired by Irving’s favorite television show, “Friends”. As we have previewed official images of the shoe, but now there is an official release date to go with all the images of this shoe. The “Friends” Nike Kyrie 5 will release May 16at nike.com and select retail establishments. The sticker price is set at $130 USD. Nike Kyrie 5 “Friends”Black/White-Bright Crimson-Amarillo AO2919-006$130May 16, 2019 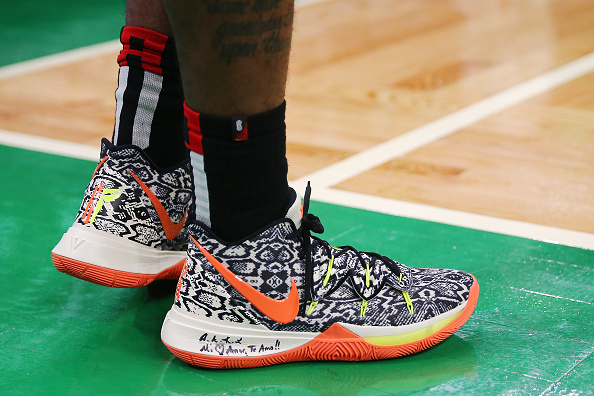 Wednesday night Kyrie Irving went of for 37 points, 7 rebounds and 6 assists in Boston’s 99-91 game 2 win over the Indiana Pacers. For last night’s festivities,Kyrie broke out a never-before seen PE of his Kyrie 5. Inspired by Kobe Bryant, the sneaker features a snakeskin pattern upper with bright orange and volt detailing. On the heel and on the tongue is a Kyrie-Kobe hybrid logo. A sail midsole and orange outsole complete this aesthetic of this Kyrie exclusive. Don’t look for a retail release for these but take…